Magnificent Ram A, the forthcoming album from Don DiLego, saw it’s roots form in Portland, OR with producer/engineer Gregg Williams (Blitzen Trapper, Dandy Warhols, Decemberists), and wind it’s way back East to the wooded Pennsylvania retreat that is Velvet Elk Studios. Many of those original sessions found their way onto his last album, 2012’s Western & Atlantic, which won an Independent Music Award for “Best Roots/Alt Country EP.” The remnants of those original sessions form the foundation of a project he’s long thought about…a collection of click-track free analog recordings that embrace their imperfections and happy accidents.

On the heels of producing recent releases from Jesse Malin (New York Before the War, Outsiders) and Hollis Brown (Loaded, 3 Shots), Don set aim at finishing the album that’s never been far from his mind. An album that would be, perhaps, less meticulous in process than his critically acclaimed Photographs of 1971. From the thunderous drone of the opening track “Karma King,” to the more intimate and personal one-take vision of “Idiot Heart,” it’s his most ambitious set of recordings to date.

Don DiLego, son of Don DiLego, a once revered railroad station bar proprietor from Western Massachusetts, learned to play music on his grandfather’s ever-so-slightly detuned grand piano. The saxophone taught him about notes for ten years until he began to get the willies from the wooden reed (sort of akin to fingernails on a chalkboard.)

Upon his father’s death after high school, he went in search of learning the science of recording in a trailer park in southern Ohio, directly adjacent to the ominous odors of a nearby paper pulp plant . He mostly found beer, pot, and the remarkable Talk Talk album, Spirit of Eden. Boston then served as a petri dish, melding the wondrous 1990’s music scene, where he formed the band Standing on Earth. After that band’s demise, he found himself in New York City in the late 90’s, surrounded by a burgeoning underground hip hop scene for which he was woefully unqualified. It did, however, introduce him to the legendary sampler MPC2000. It was those experimentations (along with the discovery of Wilco’s Being There) that would later find him signed to Universal Records for his debut solo release, The Lonestar Hitchhiker (2001).  Since then he has released four more albums for Velvet Elk Records, scored a feature film, produced artists such as Jesse Malin and Hollis Brown, and lost himself in the twisted wires and dented guitars that inhabit his wooded studio in the hills of northeast Pennsylvania.

When not taking photos of wild turkeys, woodpeckers, or the artists he is producing, Don lives in New York City’s East Village, a place where things are strangely civil.

One Little Indian announce signing of 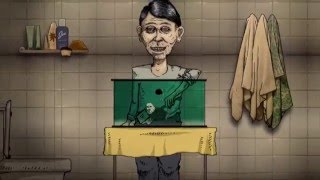 Don DiLego - The Pharmacist in the Aquarium